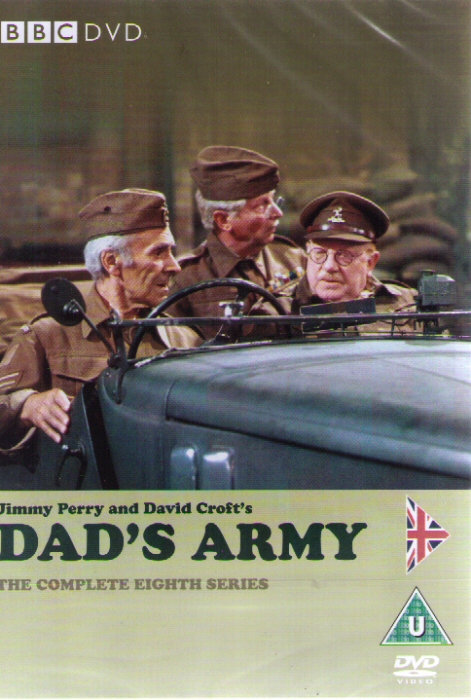 Popular BBC comedy series set in the fictional south coast seaside town of Walmington-On-Sea during World War 2. Alternating moments of gentle character comedy with broad slapstick, it recounts the misadventures of the local voluntary defence force (or ‘Home Guard’) consisting of men too old or ‘unfit’ for military service. They are led by the pompous Mainwaring, manager of the local bank, and consist of the suave, mild-mannered Sergeant Wilson , Lance-Corporal Jones, the town’s butcher and an old soldier prone to hysteria, cockney spiv Walker, dour Scots undertaker Frazer, gentle, elderly and incontinent Godfrey and dim-witted mummy’s boy, Pike, whose mother is ‘friendly’ with Wilson. They are based in the Church hall where there is much friction between Mainwaring, the effeminate Vicar, his creeping Verger and ARP Warden Hodges (the grocer) who calls Mainwaring ‘Napoleon’ and strongly dislikes him…

– Dad’s Army: The Lost Episodes
Remakes of the three missing episodes of the original BBC comedy series Dad’s Army (1968)
Dad’s Army series 2 remains incomplete, with three out of six episodes still missing from BBC archives (as of September 2019). However, the situation was previously much worse ‘ until 2001 five of the six episodes were no longer held by the BBC.Dad’s Army was less affected than most from the wiping of videotape, but three second-series episodes remain missing: episode 9 "The Loneliness of the Long Distance Walker", episode 11 "A Stripe for Frazer" and episode 12 "Under Fire". (All three missing episodes were among those remade for BBC Radio with most of the original cast, adapted from the original TV scripts. Audio recordings of all three were included as bonus features on The Complete Series DVD collection.) Two further series 2 episodes were believed lost until 2001. Two of the three missing episodes have since been performed as part of the latest stage show.