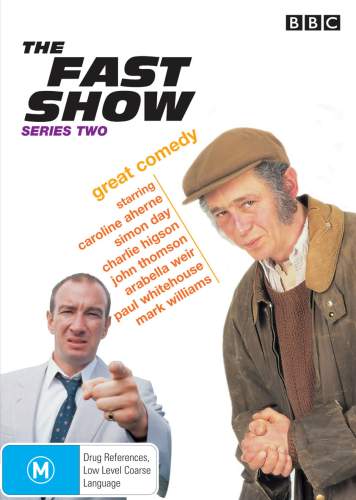 Paul Whitehouse, Charlie Higson, Simon Day, Mark Williams, John Thomson, Arabella Weir and Caroline Aherne star in this sketch show with characters like Ken and Kenneth two rude tailors. Chanel 9 a tv channel from mexico. Ron Manager a football commentator who talks about small boys and jumping for goalposts. Ted & Ralph where made by father teds Graham Linehan and Arthur Mathews about two men who have an relationship Brilliant Kid who thicks every thing is Brilliant "Unlucky" Alf a lonely old man who keeps getting bad luck Swiss Toni a car salesman who compares everything to seducing and making love to a beautiful woman Rowley Birkin QC, a retired barrister, tells mostly unintelligible stories at the fireside.

Grass
All eight episodes of the spin-off BBC sitcom about The Fast Show character Billy Bleach (Simon Day). Poor old Billy: one minute he’s at his Thai cookery class and the next minute he’s in the witness protection programme. When Billy witnesses the gangland killing of a local nightclub owner, he has no choice but to go into police protection if he wants to escape ruthless gang boss Harry Taylor (Ian Burfield) – and prison. Leaving his beloved East London, he is carted off to a small country village (he was hoping for the Florida Keys) where he has to become a completely different person. He is rigorously trained in his new identity, ready to face the world as Peter Jones – a poet. But can Billy manage to pass himself off as someone completely new?