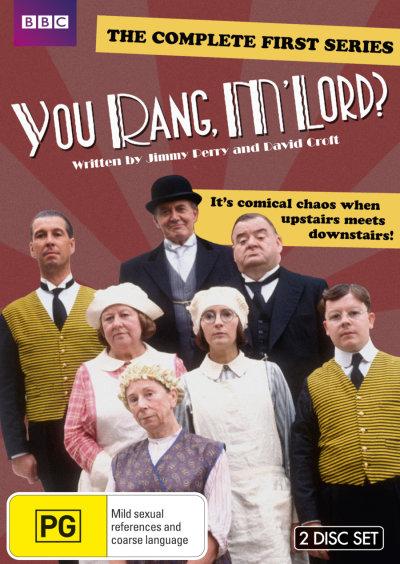 Alf Stokes (Paul Shane) and James Twelvetrees (Jeffrey Holland) first meet as soldiers in the trenches in France during the First World War. They find the body of an officer and, assuming that he’s dead, Alf robs him of his valuables. Then they find that the officer, the Honourable Teddy Meldrum (Michael Knowles), is still alive so they carry him off to a field hospital. Ten years later, James is working in the household of Teddy’s brother, Lord Meldrum (Donald Hewlett). Alf suddenly turns up and is taken on as the new butler, against James’ wishes. Alf’s daughter, Ivy (Su Pollard) also starts working in the household as a parlour maid. Her relationship with Alf is kept secret. Many of the original cast followed on to this Upstairs Downstairs take-off which was set in a stately home in 1927, and the social differences between the servants and their rich employers. Paul Shane and Su Pollard starred again, and were joined by Donald Hewlett as the rich Lord Meldrum. The story beginns: The show aired four seasons from 1988 to 1993! The theme song is composed by Jimmy Perry & Roy Moore and performed by Bob Monkhouse and Paul Shane.